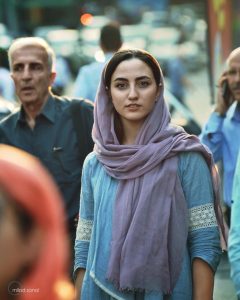 Award-winning and independent Iranian dance artist Tanin Torabi (طنین ترابی) works in the realm of performance, choreography, and film. Coming from a sociology background, she holds an MA in Contemporary Dance Performance from the University of Limerick. Torabi’s works have been honored numerously by renowned festivals and academies worldwide. She has received various awards in categories like Creative Vision Award, Jury Prize, Best Artist Film, Best Short Film, Best Inspirational Film, Best Inspiring Woman in a Film, Best Experimental Film, Best Cinematography, and Best Documentary, etc. Her works have been described as rebellious, creative, inspiring, unbearably elegant and affecting, emblematic and poignant, empowering to women, and nourished with clarity and an exceptional ambition that is layered with a complexity of personal and cultural nuance, by juries. Torabi has served as a jury member of festivals like Cannes Dance Film Festival (FR), Dance Camera West (USA), Jacksonville Dance Film Festival (US), etc.

Tanin’s most recent film works are In Plain Sight, The Dérive, Invisible Point, Ruby, Beyond the Frames, and Immensity, most of which have been created in Iran.

Alongside her filmmaking, Tanin has choreographed a number of solo performances performed in Irish World Academy lunchtime concerts, Elemental Arts Festival, What Next Dance Festival, Limerick Fringe and Culture Night Limerick. Her newest project “Sheno” is a live performance with music and film in collaboration with musician and composer Setareh Rahnama exploring the concept of Zoorkhaneh, a traditional and community sport in Iran. The initial stages of the performance have been developed with the kind support of Vayu Residency in Kashan, Iran.

Tanin’s contribution as a Movement Director, and Choreorapher have been widely appreciated by theatre directors and their audiences in Tehran plays like “Milk Powder” and “We Won’t See them No More”, and her workshops have been very well received in different cities in Iran, Europe and the UK.

As a dancer, she has danced in ensemble pieces by choreographers: John Scott (IRE), Helen Cathala (FR), Maurine Fleming(US), Charlie Morrissey (UK) during her stay in Ireland, and she directed a group of Iranian dancers for the New York based choreographer Heidi Latsky for their online performance ON DISPLAY.

Since 2020, Tanin has become one of the members of The School of Hard Knocks dance company directed by the renowned NYC based choreographer Yoshiko Chuma. Her first collaboration with Yoshiko Chuma was in the company’s online show series called SML (Saturday Morning Live)- Zooma: Dead End, commissioned by La MaMa Experimental Theatre Club in 2020 during the COVID-19 pandemic. In 2022, Tanin was invited to Boucherie Centre d’Art Performatif in France to collaborate with Yoshiko Chuma on a piece called Head in the Sand, and also by Companie Humane directed by Eric Oberdorff to participate for screenings of her films in 22nd edition of Nice Short Film Festival, and offer educational events held in Nice Conservatoire and Villa Arson university of the arts.

Tanin is currently living in Iran and working on her projects, digging into the meaning of the movement for herself in the everchanging society of Iran with all its complexities and subtleties.

For more detailed information about Tanin’s works or for any collaborations, please kindly contact her via this email address: